A year after its launch, the CARMEN joint research laboratory (JRL) took the opportunity to conduct an initial review of progress and define its future program at a meeting of the steering committee held on 8 July 2020. Despite the impact of COVID, the JRL enjoyed a successful debut year both in human terms and scientifically.

In order to pursue the objectives of the scientific project under way, the consortium has brought together numerous academic and industrial partners: 40 researchers were involved based at five different sites, representing something of an operational challenge.

Managed collaboratively, partner teams began their work and intensified their exchanges, resulting in a consolidated and dynamic consortium and the reinforcement of overall coherence and the scientific project as a whole. This high-quality scientific approach has already led to the transfer of the first results.

The structure of boehmite - a material that is transformed into alumina, an essential catalyst support used in heterogeneous catalysis in the refining sector - pastes remains poorly understood on large scales. The JRL aims to understand the structural evolution of boehmite, from suspension to extrudate.

The structure of boehmite pastes was also the focus of a multi-scale 3D study of its morphology and texturing through the various alumina preparation steps, giving rise to a first reconstruction of the three-dimensional structure of a standard sample.

To understand molecular and/or colloidal transport in porous media, the JRL is not focusing its study on natural soils since they are too complex. Research teams thus had to lay the groundwork required for the development of a method for preparing mixed porous media yet to be defined.

To do so, reconstituted systems of clay and silica particles of various sizes were the focus of a multi-scale geometric study based on three imaging surveys - TEM (transmission electron microscopy), SAXS and SOLEIL’s Anatomix beamline (dedicated to X-ray tomography, on a micro and nanometric scale) -, in order to establish several preparation protocols. The latter are now being used either to combine clay grains with silica grains, or generate silica coatings involving a cay cap.

In this field, the JRL has primarily focused on preparing future modeling projects. Publications by Céline Chizallet, in particular, were useful for furthering the state of the art on the subject: one publication focused on the results of a theoretical zeolite modeling study concerning the development, using density-functional theory (DFT), of models of the external surface of the ZSM-5 zeolite, and another related to the modeling of complex zeolite catalysts.

Four projects were also submitted to the ANR, one of which successfully completed the 1st selection phase. These early advances, achieved despite the context of the pandemic, augur well for promising developments. 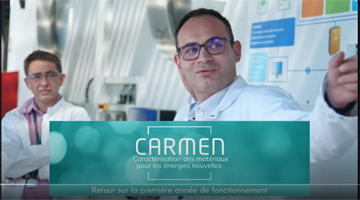 CARMEN is a Joint Research Laboratory (LCR [Laboratoire Commun de Recherche]) devoted to the characterization of materials for the energy transition.